Clues to Vedic origin of Christianity

CHRISTMAS IS KRISHNA MAAS
1. Christmas or X-mas is nothing but continuation
of Hindu tradition in a different form. Christmas
literally means Krishna-Maas or month of Krishna.
2. The X in X-mas or ‘Dec’ in December refers to
number 10. Because if we calculate as per Hindu
Calendar which starts in March, December is the
10th month. As per English calendar, December is
12th month and hence number 10 in X or Dec does
not make any sense.
December is root of Dashambar meaning tenth part
of sky meaning tenth month of the year.
3. Bell, Book and Candle – the major symbols of
Christmas are nothing but reminiscent of Hindu
temple where bell is a must, book refers to holy
book and candle is equivalent of Deepak or light of
Yajna. Bell is derived from Sanskrit word “Bal”
meaning strength. Bell is used in temples to
provide strength to prayers.
4. 25th December is neither first day of the year,
nor 25th December the date of Christ’s birth nor
midnight the time of his birth, as admitted by
Christian scholars themselves. Then why is
Christmas celebrated on 25th December?
Because this was time of another famous festival
Saturnalia festival which was part of traditions
before Christianity was forced upon.
“The Plain Truth about Christmas” was published
by a staunch Christian Organization named
Worldwide Church of God. It admitted to these
theories and appealed to Christians to stop
following non-Christian traditions of Christmas.
5. The idols of Mother Mary with baby Christ are
no different from those of Yashoda with Krishna. To
an unbiased observer, there is no difference in
Janamashtmi idols and Christmas depictions of
Mother and Child. Even the story has surprising
similarities. Jesus was gifted to Mary by God. And
Krishna too was gifted by fate to Yashoda!

THE VATICAN PAPACY
1. Christianity is derived from Sanskrit term
“Krishna Neeti” implying the way of life expounded
by Kirishna.
2. Pope derives from “PaapaH” meaning remover of
or absolver from Sin.
3. Vatican derives from “Vatika” which means a
hermitage. In Vedic tradition, sages used to live in
hermitages.
4. Etruscan Museum of Vatican displays several
Shivalingas with cobra raising its hood over Shiva’s
head.

5. Priest and Abbot derive from “Purohit” and
“Bhat” respectively, both signifying Vedic priests.
6. Deity, devotee, divinity are all derivatives or
equivalents of Sanskrit words such as diva, devata
and devaniti.
7. Pontiff is a corruption of the Sanskrit term
‘puntah’.
8. The Pope was the Shankaracharya for the
European region of world Hinudom until hisseat
was pounced upon and was forced to turn Christian
by emperor Constantine, around 312 AD
9. Saint obviously is offshoot of ‘Sant’. Apostle is
Sanskrit ‘Aap-Sthal’ signifying one who proceeds
from place to place (for preaching).
10. Several scholars, like H Spencer Lewis, have
talked about hidden and secret records in Vatican.
If there is indeed anything genuine about Jesus
Christ, why it is being hidden?
11. Papacy originated around 4 AD while Jesus is
supposed to have lived around 1 AD. If Jesus-time
records are hidden in the Vatican, what was its role
before 4 AD? Is it that these records are not being
made public because they will expose that Christ
was a myth and the roots of Christianity lie in
Vedic institutions?
CHRISTIAN TRADITIONS
1. There are no records of Jesus founding
Christianity as Jesus was a fictitious personality.
The credit for spread of Christianity goes to St Paul
and then to armed campaigns of Constantine
emperor.
2. Bible is a hodgepodge of the Old Testament, the
New Testament versions written by several persons
like Matthew, Mark, Luke and John at different
places and different times, the Apocryphs and even
angry correspondence.
The original Bible is nowhere to be found (it does
not exist in first place). What we have is haphazard
translation from language to language at will by
the translators or their mentors to suit their own
convenience, convictions or predilections, from
Aramaic to Greek, Greek to Latin, and thence into
French, German, English etc. The word Aramaic is
derived from ‘Arya’ in Sanskrit.
3. The introduction to the Holy Bible printed by
Cambridge University Press admits that Latin
translations of the Old Testament were too many
to be all good. None were from original Hebrew but
from Greek versions which were not clear. The
Latin version derived from it was all “muddy”.
Some believed that Lucian and Nesychius made
false additions to Old Testament which were
excluded by St Hirome and St Chrysostome.
All this points to a confession of Christian hanky-
panky confusion. Who knows who introduced new
matter or changed previous ones?
4. Still we find several Vedic names in Bible like
Krishna as Christ, Hari as Henri and Harry,
Keshava as Jehova, Hari-Kul-Ish a Hercules,
Ganesh as Janus etc.
5. Chapter 3 of Exodus states that the angel told
Moses to remove the shoes from the feet because
he was standing on Holy ground. This proves that
Vedic tradition of removing shoes in temples was
prevalent.
And God said to Moses, “I am that..I am that”.
This is nothing but “Aham Tat Sat”
6. Baptism is derivative of Sanskrit phrase “Baspit
Sma” meaning “We have sprinkles holy water”.
Young Jesus was baptized by John, the Baptist.
Thus John was a professional Brahmin.
In essence, to be a true Christian, embrace the
Vedic ideology of Sri Krishna. Follow Chapter 2 of
Gita and reject all superstitions as guided in this
wonderful gift to humanity.
Vedas are the foundation of all religions.

St. Augustine of Hippo (354-430 AD) wrote:
“This, in our day, is the Christian religion, not as
having been unknown in former times, but as
having recently received that name.”

Eusebius of Caesarea (circa 283-371 AD) said:
“The religion of Jesus Christ is neither new nor
strange.”

In Anacalypsis, The 17th century British
orientalist and iconoclast, Godfrey Higgins,
insisted that Christianity was already firmly in
place in both the West and the East, many
centuries before Jesus Christ was born. He said,
The Crestians or Christians of the West probably
descended directly from the Buddhists, rather
than from the Brahmins. (Vol. 2, pp 438, 439.)
[buddhism came from hindus as budhha was
himself a hindu prince]

“Melito (a Christian bishop of Sardis) in the year
170, claims the patronage of the emperor, for the
now so-called Christian religion, which he calls
“our philosophy,” on account of its high antiquity,
has having been imported from countries lying
beyond the limits of the Roman empire, in the
region of his ancestor Augustus, who found the
importation ominous of good fortune to his
government.” This is an absolute demonstration
that Christianity did not originate in Judea, which
was a Roman province, but really was an exotic
oriental fable, imported from India , and that Paul
was doing as he claimed, viz: preaching a God
manifest in the flesh who had been “believed in
the world” centuries before his time, and a
doctrine which had already been preached “unto
every creature under heaven.” (Bible Myths and
Their Parallels in Other Religions; T. W. Doane, p.
409.)

Many ancient European portraits of Christ
illustrated in this book show
Hindu signs on him like dark complexion, a sacred
thread, hanging from his
left shoulder, a Dhoti around his waist, a Tilaka
on forehead, a Mudra of
his fingers, a Danda in his hand and saffron robe.
Those portraits are
painted by Christian European artists some 1500
years ago. Jesus was called
‘Ben Pandera’. In Tamil ‘Ben’ means Child and
‘Pandera’ means Devotee. The
name Mary arose from Marium, which came from
Tamil ‘Mariamma’. Her
portraits
show Hindu signs on her body. Her pictures are
also ancient, sketched
around
1500 years ago. Sister of Christ was named
‘Thamar’ which means Lotus in
Tamil, and it is a custom in India to keep name of
a girl as lotus. Jesus
often told parables from ‘Gheeda’. Gheeda is a
corrupt form of ‘Geeta’.
There was no such book as Gheeda around
Palestine before Jesus. He told
stories of Jash. ‘Jash’ is a corrupt form of
‘Vyasa’. [like Vyankappa =
Yankappa. Yajna = Jajna]. ‘Jesus’ is derived from
Greek ‘Jeshua’, a
deviation of Keshua or Keshava. He was
supposed to be incarnation of
Krishna. The term ‘Krishna’ corrupted into
‘Krishta’ and ‘Christ’. Therefore
he was termed as ‘Jesus the Christ’, meaning
Keshava the incarnation of
Krishna. Though a carpenter he is called ‘Good
Shepherd’, in memory of
‘Gopala’ Krishna; because he was supposed to be
an incarnation of Krishna.
There are many pictures of Jesus just like lord
Krishna and his
incarnations. After his Thread ceremony at 12
years of age, he went to
India for studies and returned at 30. He wore a
Philacteris made of Teckilim
or
Darbha. He emphasized a second birth (Dvija) for
getting Heaven. This
‘Dvija’ is
the unique concept of Vedic people. Ample
evidence has been showered in
the
book to prove that Christ was a Hindu. Savarkar
has given evidence to show
connection of Jesus with the Nath cult of Indian
Yogis. 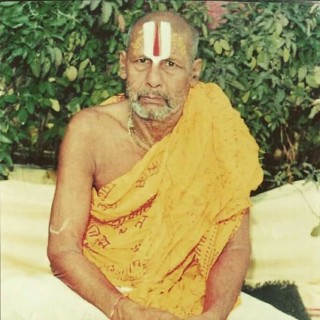 ®This website is built by the grace of HH Sri Ganeshdas bhaktamali maharaj and HH Sri Ramharshan das maharaj. It describes the life and teachings of great saints from the holy book named Bhaktamal. For detailed information on Bhaktamal please visit the ABOUT US section of website .